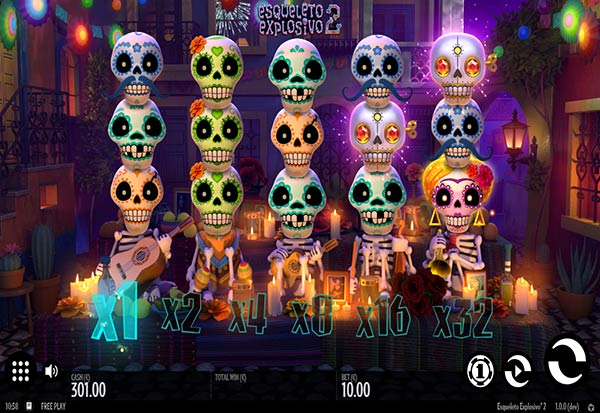 Are you ready to celebrate the Day of the Dead? Thunderkick’s 2020 release Esqueleto Explosivo 2 is a sequel to the popular slot of the same name. The slot takes players on a journey through the celebration of the lives of loved ones who have passed away.

The Day of the Dead originated primarily in Mexico, which remains the country that’s most closely associated with the holiday. Rather than be sad at the loss, the Day of the Dead sees death as an opportunity to remember the good times with deceased loved ones. Family members and friends typically gather together to share stories and add to their ofrendas, home altars built to hold remembrances and offerings to the dead. The slot recreates that sense of irreverent familiarity, allowing players to relax and enjoy their spins. There are no spooks to be found here!

Esqueleto Explosivo 2 follows closely after the first title in the series. In fact, at first glance, players might not see much difference between the two games. Luckily, the game mechanics have been refreshed just enough to create a more exciting experience for fans and new players alike. Paylines have been expanded from the original 17 to 99, and players can form winning combinations diagonally as well as horizontally. A highly volatile title, Esqueleto Explosivo 2 offers an average Return to Player (RTP) of 96.13% and allows players to bet from €0.10 to €100.

How to Play Esqueleto Explosivo 2

Esqueleto Explosivo 2 is packed full of bonus features. From old standards such as wild symbols and free spins to big multipliers and ‘dropping symbols’, the game has something to keep just about anyone entertained.

The dropping symbols mechanic is essentially a cascading wins system. Symbols included in winning combinations will explode and new symbols will drop down to replace them. The best part of the feature is that the replacement process continues until no more combinations are possible. As long as the symbols keep exploding, the chance for a big win will stay on the table.

Multipliers are another exciting part of Esqueleto Explosivo 2’s gameplay. Symbols boosted by mucho multipliers increase by between 1x and 32x. The payout value multipliers begin with 1x and double every win that occurs as part of a symbol drop. Wild symbols also increase whenever wild symbols appear.

Appearing on reels four, three, and two, Esqueleto Explosivo 2’s wild symbol substitutes any of the symbols in the game except for the scatter symbol. The symbol can also explode, destroying between three and eight other icons in its vicinity.

Landing an additional two, three, four, or five scatters during the free spins round awards up to 12 additional free spins, with an extra two added on top with every scatter over five that lands at any one time.

While playing Esqueleto Explosivo 2 for this slot review, the game’s strengths were abundantly clear. Risky and engaging spins are something that the game does well, and players will likely not find their minds wandering while they play. The game’s design might not be the most modern, but the graphics are charming and feel true to the theme.

The gameplay here is not the most unique, but this is not to say that it is a boring experience. The game’s multitude of bonus features ensures that every second is exciting. From the free spins round, which can go on for quite a while with a bit of luck, to the impressive multipliers, big wins are right around the corner with Esqueleto Explosivo 2. The potential for a 5,000x max win is enticing enough for casual and experienced users alike.

Esqueleto Explosivo 2 is not only a worthy sequel to Thunderkick’s popular original release but is also arguably the better title. The addition of the free spins round is especially well done, and the slot has more than enough going on to warrant a try even if the theme isn’t something that you would usually choose.

Can I play Esqueleto Explosivo 2 on my mobile phone?

You can play Esqueleto Explosivo 2 on mobile phones! The game has been optimized for small as well as large screens ranging from desktops to tablets and even smartphones. Find a trustworthy online operator that offers mobile play, such as VIP Coin, and you can get started!

Can I play Esqueleto Explosivo 2 for free?

You can play Esqueleto Explosivo 2 for free when you sign up with a reputable online casino offering demo play. VIP Coin, for example, allows players to play some of our most popular titles for free. This is a great way to get a feel for a game before you decide to make-real money bets that could have a big impact on your budget.

How do you win Esqueleto Explosivo 2?

Winning Esqueleto Explosivo is easy to understand, but more difficult to achieve. In simple terms, all you have to do is get a winning spin. This does not require skill – slots are games of chance – but it can take quite a bit of time to achieve. Some players never manage to win big despite spending many hours and lots of money on a single game. Winning requires a hefty budget and some serious luck.