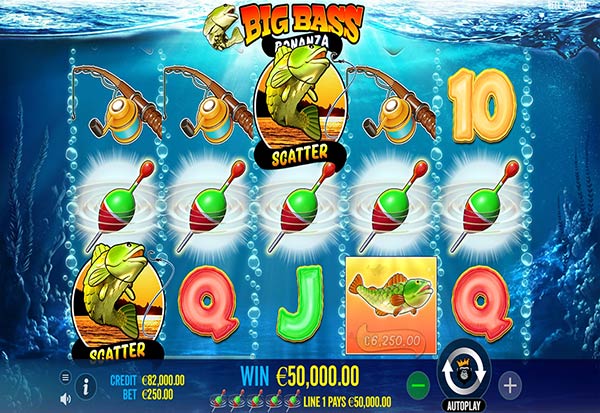 Is Pragmatic Play’s angling-based slot a big catch, or a little tiddler?

Big Bass Bonanza is a relatively new slot from Pragmatic Play, released toward the end of 2020. Even in that short space of time, it has built a superb reputation in the short time it has been out. It has eye-catching aesthetics that match the theme of the game perfectly and the bonus round is absolutely incredible. This is definitely a title that will grab player attention from the outset.

Big Bass Bonanza has top tier visuals and audio in place. Being a fishing-based game, everything is perfectly in line with the theme of the game. The music and sounds provide a very cheerful backdrop to the title.

A noted in this overview, the features in the game are slightly different to other titles on the market. However, the bonus round is where the fun really starts and it really takes this game to the next level. It would be nice to have more than one feature included in the game, but the sheer quality of it makes the Big Bass Bonanza free spins really stand out.

Even as a high volatility game, the payouts are still set relatively low. Players are able to win up to 2,100 times their stake, which for a game with high volatility, isn’t as high as other titles on the market. However, where it does make up for this is that it’s theoretically possible for this win to be made multiple times in a row.

If you’re a fan of playing on the go, then Big Bass Bonanza really steps up to the plate. The title is optimized for mobile, which provides perfectly scaled visuals and easy to use controls. It makes sure that all players can access the game easily, even while on the move.

With the Big Bass Bonanza RTP set at 96.71%, this is definitely a game to take a close look at.

How to Play Big Bass Bonanza

Big Bass Bonanza puts players right into the action. It has a relatively small number of paylines available on the reels, with just 10 on show. This is below the market average and may worry players slightly. However, once you get into the actual game, it becomes apparent that this isn’t too much of a problem. The symbols are all based around the fishing theme of the game – with the float symbol paying out the highest amount and the Ace, King, Queen and Jack symbols making up the low paying symbols.

The small number of paylines means that wins can be hard to come by during the base game. However, as the volatility is on the higher side, this isn’t something that will come as too much of a shock. There is a scatter symbol included in the game and this activates the Big Bass Bonanza free spins round.

The free spins round is where the fun really begins in Big Bass Bonanza. When three scatters land, 10 spins are awarded, four scatters give 15 spins and five scatters give 20 spins. What makes the bonus round stand out at first is the addition of a wild symbol to proceedings. This obviously makes it much easier to create wins as the wild can land on the reels and link up with other symbols. That’s not all that it has to offer to players when it appears, though.

It’s not just the extra spins and multipliers that the wilds offer, either. Whenever a wild symbol lands on the reels at the same time as fish symbols, whatever cash value is on the fish will be paid out, regardless of paylines. Overall, this makes the bonus feature one of the very best on the market.

Big Bass Bonanza grabs the player’s attention right from the very start with its impressive graphics. It looks great and the bonus round is absolutely one of the very best on the market. Although there’s just a single bonus round, it is of such good quality that it can compete with almost any other game on the market. The base game might not have a huge amount of win potential, but the bonus round really does make up for this.

The theme and graphics are aligned perfectly. It ensures that you won’t be taken out of the moment by something that doesn’t really sit right with the fishing theme of the title. It also has some really cheerful music that makes it a game you’ll be humming along to the whole time you play.

Despite having a base game that won’t turn too many heads, the bonus round ensures that the high volatility makes complete sense for this game. The ability for very big wins to arrive combined with consecutive wins in the bonus round is what really sets this title apart from the rest.

Big Bass Bonanza has created a large amount of buzz in the video slot world and it’s for good reason. If you like to play for big wins, then this is the game for you.

Where can you play Big Bass Bonanza for free?

There’s a fantastic Big Bass Bonanza demo version available here at VIPCoin Casino. All you have to do is load up the title and you can start playing right away. It makes it extremely simple to get to grips with how the game is played without having to use any of your budget to do so.

Can you play with Big Bass Bonanza with cryptocurrency?

That’s absolutely possible. All you need to do is fund your account using your crypto of choice here at VIPCoinCasino. Once that’s done, you’ll be able to start playing right away. If you don’t want to play with crypto then fiat currencies are also accepted.