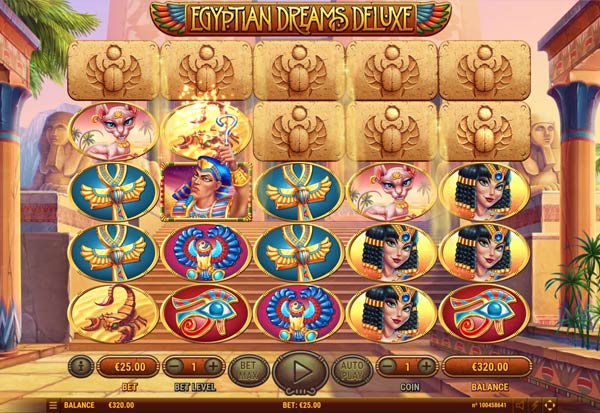 Take a trip to the endless sands of ancient Egypt with popular slot developer Habanero and roam the Nile in search of treasures untold. Serving as a muse for countless authors over the centuries, ancient Egypt was home to opulence still admired today as well as an intensely interesting society whose impact can still be felt. From books to movies and everything in between, the ancient civilisation of Egypt remains a popular element of pop culture around the world.

Drawing on the intrigue that has made ancient Egypt one of today’s most enduring fascinations, Habanero has given Egyptian Dreams Deluxe an aesthetic fit for royalty. The video slot takes place in an impeccably crafted courtyard featuring intricately carved sphinxes and ornate pillars as well as the hint of pyramids in the distance. The hazy sky fades into a peaceful mixture of purple, yellow and orange, providing the perfect backdrop for palm trees swaying in the breeze. Fans of the concept might consider taking a few moments to soak in the artwork before jumping into exciting spins.

Egyptian Dreams Deluxe is a five-reel, five-row slot machine game with 3,125 bet lines just waiting for players to win big. Hit spin and watch the neutral graph transform into a sea of wild colors and detailed designs, including golden sphinxes gleaming in the sun, Cleopatra herself glimmering in the breeze, a scorpion and even a hairless sphinx cat adorned in gold. A bet range from €0.25 to €5,000 completes this luxurious picture, making room for both casual players and high rollers alike. The volatile game offers a theoretical RTP of 95.79%, which is about average for video slots.

How to Play Egyptian Dreams Deluxe

Egyptian Dreams Deluxe’s features are all dedicated to creating a sense of royalty and risk, including wild symbols, a progressive jackpot and a mini game of sorts that requires players to unblock pyramids on the reels until they form matching combinations.

The especially lucky have the chance to land the mummy’s jackpot! Larger wagers can make reaching the jackpot and its maximum win of 100,000 coins a bit quicker, but even smaller wagers have the chance to deliver the big win. It is worth noting that Egyptian Dreams Deluxe is a progressive slot, which means that the potential payout continues to grow as more players play it. Fans of momentum and a sense of achievement might find the slot to be a great fit.

Players can win up to 60 free spins depending upon the pyramids they unlocked during the bonus round as well as their luck with respins. Players can land additional free spins during the round if they land three or more scatters.

Egyptian Dreams Deluxe features wild symbols that can substitute for every other symbol in the game except for scatters. Whenever wilds land underneath a block on the grid, the rock is broken and the ways that players can win (until positions are reset by another free spin) is permanently increased.

Egyptian Dreams Deluxe ended up being quite entertaining. Much of this is due to the successful implementation of the game’s ancient Egypt theme, which manages to feel familiar without feeling overly stereotypical. The graphics really are quite well done, and the bright colors and slightly tongue-in-cheek references are a welcomed addition to the title’s exciting spins. Such a popular theme does not always result in unique, polished graphic design, but Habanero hit the ball out of the park with this one.

As far as the gameplay goes, Egyptian Dreams Deluxe delivers. The gameplay is exciting and risky, keeping players on their toes. While this might not make the game a great fit for those in search of a relaxing and low-stakes game, it is an undeniably fun addition to the player experience. Even the bonus features, few of which could be considered “novel”, are more exciting than they have any right to be thanks to the ridiculously high payout they stand to award. Players can land up to 60 free spins as soon as the round is triggered, for example, which is surprisingly generous.

Egyptian Dreams Deluxe is an excellent slot from popular developer Habanero with both the style and substance to keep players spinning.

Can I play Egyptian Dreams Deluxe on mobile phone?

Most modern slots are available on both desktop and mobile devices, and Egyptian Dreams Deluxe is no exception. Habanero has designed the game to work seamlessly on many different screen sizes and hardware. It is important to make sure you play with a quality online casino if you are hoping to have the best experience possible! VIP Coin offers players a casino designed for optimal mobile play.

Can I play Egyptian Dreams Deluxe for free?

Free play is possible with Egyptian Dreams Deluxe. This slot review might not have detailed this feature, but reputable online casinos offer demo mode slots among their titles. VIP Coin, for example, allows players to access the demo of their games for free before they play with real world money. Not all internet-based casino operators have this feature, so make sure to do your research before signing up.