Finn and the Swirly Spin review

What is the obsession with casino games and leprechauns? NetEnt’s Finn, though, is definitely one of the most recognisable examples of this trend. Find out with us how his Swirly Spinn slot game cuahgt players’ attention around the globe. 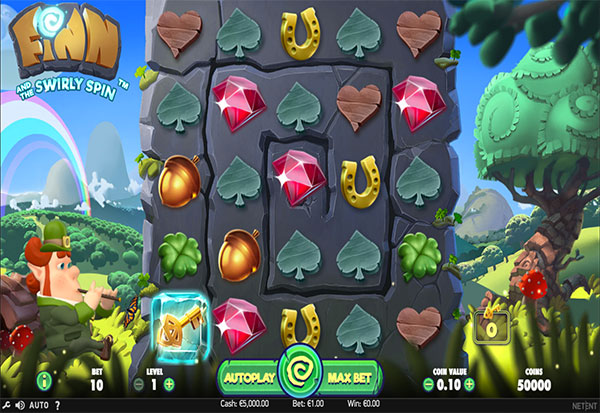 Finn and the Swirly Spin

NetEnt releases a lot of great slots titles, but Finn and the Swirly Spin is particularly unique. This slot is designed with a spiral reel pattern that twists as you play. The game is set in the Emerald Isle, a magical world with leprechauns, rainbows, and of course, pots of gold. Finn is the principal character here, and you must navigate through the game alongside him in search of hidden treasure.

Like most Irish-themed slots, there’s a burst of green colour across the screen. The lush, vegetative landscape accentuates the theme and boosts the aesthetics, while an Irish flute plays in the background. The playing field is a 5×5 grid, and besides Finn the magical leprechaun, reel symbols include spades, hearts, four-leaf clovers, lucky horseshoes, acorns, and rubies. Any horizontal or vertical combination of three or more matching symbols awards a payout. There’s a Star wild and a locked Key symbol that acts as the scatter. Rubies are the highest paying symbol, offering 50x your stake for five of a kind.

The developer showed a lot of creativity with this slot, and since its release in 2017, Finn and the Swirly Spin has received lots of recognition from players. This was partly due to the never-before-seen gameplay style. On the other hand, players also fell in love with the action-packed experience. The slot offers four different free spins features, wild substitutions, avalanche reels, and randomly triggering features. There is also an impressive RTP of 96.62%, and it’s a game that won’t leave you on too long a dry run, thanks to the low to medium volatility. It allows bets between $0.10 and $100 per spin.

How to Play Finn and the Swirly Spin

Finn and the Swirly Spin is feature-rich and will throw in several surprises when you don’t expect it. Here’s a list of special and bonus features to be enjoyed.

Matching combos will trigger the avalanche reels feature embedded in this slot. Winning symbols explode off the grid, with new ones taking their place. Symbols load from the left-hand corner and swirl towards the centre of the grid.

One of four random features can trigger on any spin of the reels, including:

Starfall Wilds – Between two and five wilds are placed on any of the reel positions, except on the locked key symbol. As per the usual function, the wilds will substitute other regular symbols to create winning combinations. This feature retriggers if no win is made.

Dragon Destroy – This can occur on any dry spin. It eliminates a certain number of symbols from the reels, triggering an avalanche.

Irish Luck – This feature guarantees a win by multiplying a symbol through a vertical or horizontal line.

This slot also has four free spins variants, each offering a different number of freebies. The locked key scatter is the feature trigger and activates the free spins when it lands in the central position.

Finn and the Swirly Spin Rating

Through the years, we’ve seen lots of slots inspired by Irish folklore. It’s a rather common slot theme, so Finn and the Swirly Spin isn’t anything new in that regard. It’s the setup and game features that make it recognisable. Although it looks complicated, the slot is actually quite simple to play once you get into it. Thanks to the avalanche mechanism and the random features, there’s a ton of excitement in the base game, and the bonus round ramps up the action even more.

You may want to look elsewhere if you prefer huge payout slots as this one offers only 420x your stake on the random features and a maximum of 500x on each free spins feature. The low volatility also implies frequent but small wins. On the bright side, the game compensates with a wide betting range, making it a good fit for all player levels. It’s also great to see that it has an above-average RTP.

Finn and the Swirly Spin is a great choice if you’re more into the entertainment aspect of slots gameplay. The cheery mascot also makes the slot very memorable, and we found the music to be more relaxing than obtrusive. NetEnt is known for churning out some of the most innovative online casino games, and Finn and the Swirly Spin is another testament to their creative prowess behind the slot reels.