Catch all the magical payouts in this high-volatility video slot that reignites the genie theme with plenty of thrilling features. Blueprint brings the generous genie back to your screen and adds more excitement to the popular prequel slot, Genie Jackpots.

The original slot was released in 2015 to much delight from players. This Megaways version is an extension of the original slot and houses a dynamic structure of six reels and rows that range from two to five. It also comes with four amazing bonuses, an improved free spins bonus, and a Buy the Bonus option.

Genie Jackpots Megaways takes its cue from Big Time Gaming’s Megaways system, which constitutes a random reel modifier that provides a varying number of symbols across the reels on every spin. In effect, players get up to 15,625 ways to win and make up to 25,000x the stake. With an RTP of 96.52%, anyone can experience the luck of Aladdin in this slot.

How to play GENIE JACKPOTS MEGAWAYS

Genie Jackpots Megaways is packed with many features, including free spins and bonuses that offer increased payout chances. Despite what is suggested by the game’s title, this video slot does not come with a progressive or a fixed jackpot. However, a combination of the features during spins can award jackpot-sized payouts. This Genie Jackpots Megaways slot review will reveal all there is to know about the many bonus features you can enjoy.

These are only obtainable in base games. The magical genie randomly appears from its lamp to grant players any of the four bonus wishes below:

This brings extra Wild symbols to the reels on maximum Megaways, which significantly increases the win potential. These symbols can turn a whole reel Wild.

The genie can turn an entire reel Wild, and upon hitting the same reel again, it multiplies it by up to 5x.

Genie Win Spin – Here, the genie puts mystery symbols and Wilds on the reels in such a way that a win is guaranteed.

Bonus Megaways – This feature opens the door for another feature called Genie Spins by adding more bonus symbols to the reels. 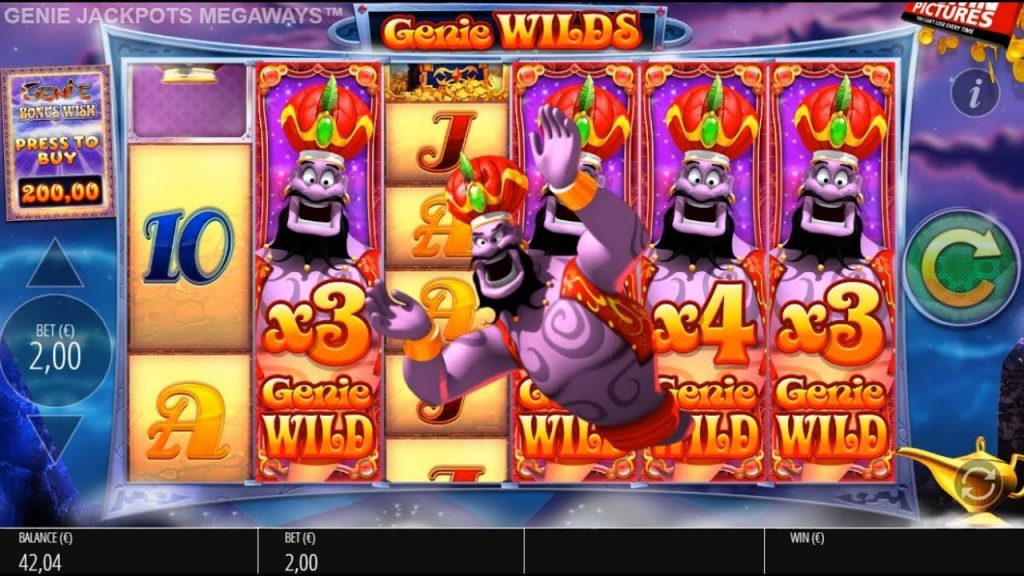 When players land three or more bonus symbols, they activate the Genie Spins feature and get between 10 – 20 free spins depending on the number of symbols that triggered the feature. It gets even better as players are taken to the genie’s secret cave, where they get the option of choosing one out of four magical gold lamps. Each one of them represents a unique free spin feature:

This is activated after every normal win as the winning symbols remain in place while the reels respin to get further wins.

This feature largely increases the win potential by adding multipliers during free spins. For the first free spin, the multiplier is 1x and then climbs up a unit after every spin.

During free spins, mystery symbols land on the reels and reveal symbols to increase winning chances.

Any Wild that appears on reels two to five will be locked in place for the rest of the free spins. Where an entire reel contains Wilds, free spins are awarded. 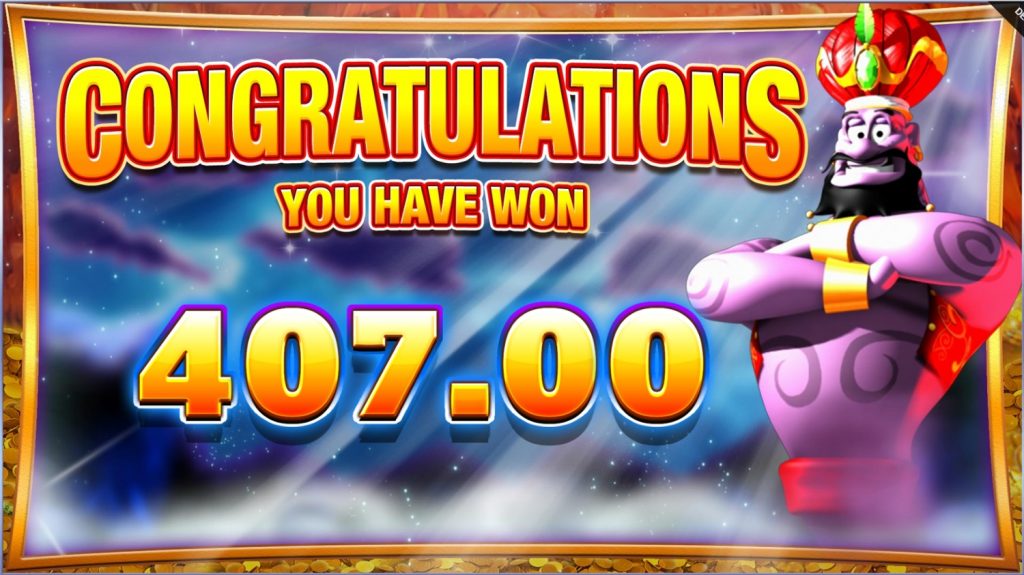 Between the high-paying symbols and paylines of up to 15,625, players stand a chance of walking away with 25,000x their stake. While the max win is lower than the 50,000x offered on the original slot, this version is packed with more features and an impressive layout. The Genie Jackpots Megaways slot comes with a very dynamic reel structure and bonuses like free spins, which make way for other features. If you liked the prequel and are a fan of the Megaways mechanic, this slot will deliver a mind-blowing experience. The genie theme does not end with the graphics or soundtrack as players feel the magic and thrills when the bonuses are activated.