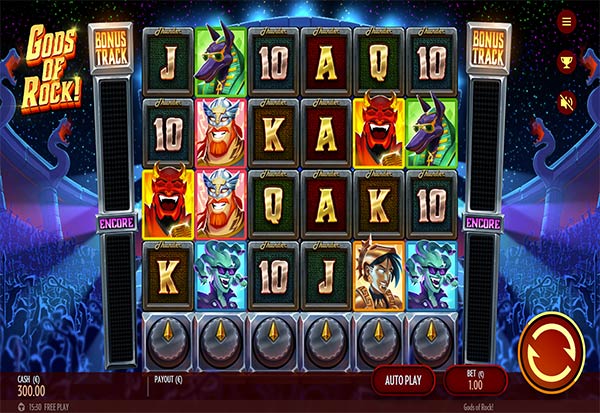 Get ready to rock out like never before! Throw those hands in the air and show the Sign of the Horns while rocking out to this high-voltage game. With Lucifer taking center stage as lead singer, Thor on drums and Medusa, Anubis and Athena accompanying on guitars, there’s plenty of hellraising happening here.

Join the crowd surrounding this rock stage with its floor-to-ceiling side speakers advertising the Wild Encore and Bonus Track, where we’ll see charged wilds filling up the meters, 30 for Encore and 55 for the Bonus track, which dishes out eight free spins.

The symbols are bass speakers emblazoned with the five epic bandmates, card royals, 10, 9 and a Sign of the Horns wild. The earth-shattering riffs descend upon the crowd while the 6-reel, 4-row grid and 466 connecting payways spin out on center stage, offering rockstar rewards and features.

As is to be expected with this Gods of Rock slot, the game is highly volatile, providing a return to player (RTP) of 96.05%, a thunderously high percentage. Bets can be as low as £/€0.10 and rise to a screeching £/€100 per spin. Groupies will be rocking out to the knowledge that they can win up to 20,000x bet on this Thunderkick slot.

Matching three or more symbols across the 466 connecting payways will result in a win. Add in the wilds and reel multipliers and there’s a sum to be won. The five band members are the highest paying symbols, with Lucifer topping the bill with a 5x bet awarded for landing six of him.

The rest of the group range from 1.4x to 2.5x bet for landing the maximum, and lower-paying symbols result in 0.8x to 1x bet for six. The Sign of the Horns wild symbol will pay out 5x bet just like Lucifer for landing six.

How to Play Gods of Rock

The Gods of Rock slot features two wilds, a regular and a charged wild. Both substitute all other symbols to create wins. Every time a charged wild lands on the reels, it increases the reel multiplier by one (up to a max of 11x) and then explodes destroying a number of surrounding symbols, a minimum of three and a maximum of eight. Once it’s exploded, it drops down the reel to become a regular wild.

The Bonus Meter collects every exploded symbol. Collect 30 to trigger the Wild Encore feature. Push past the 30 and collect a maximum of 55 exploded symbols, to be awarded the Bonus Game with eight Free Spins.

The reel multipliers are carried over from the base game and never reset. Players receive eight Free Spins. During the Bonus Game, the Bonus Meter will not reset until it is full. Once it is full, players are awarded a further three Free Spins.

Once the Bonus Meter collects 30 exploded symbols, Wild Encore is activated. During this feature, one to three Charged Wilds will be randomly added to the reels, creating more winning combinations and exploding symbols.

You don’t need to be a massive fan of any particular kind of music or band to enjoy Thunderkick’s Gods of Rock slot. The video slot immerses you straight into a live concert atmosphere with fun characters rocking the reels.

The stage setup is authentic, graphics are cool and attention to detail with symbols emblazoned on speakers doesn’t go unnoticed. The music is banging rock ‘n’ roll but not annoying to the point of pulling the plug. It all fits together smoothly.

The bonus features are plentiful with a build-up to the epic Bonus Game with free spins, extra spins, increasing reel multipliers and charged wilds. Players should check out the Gods of Rock slot demo to experience these features for free. It’s epic.

Lucifer and his bandmates provide a great opportunity for wins from 1.4x to 5x bet. The Charged Wilds are in abundance, Reel Multipliers go up to 11x and there is a potential to win a maximum 20,000x bet. Checking out the demo of Gods of Rock will give you a feel for the 96.05% return and the high volatility that this slot can provide.

What is the maximum win on Gods of Rock slot?

The maximum potential win on Gods of Rock slot is 20,000x bet. High-paying symbols like Lucifer can award you 5x bet for landing six, the rest of his bandmates, Medusa, Anubis, Athena and Thor, will reward up to 1.4x, 1.6x, 1.8x and 2.5x bet respectively.

Can I play Gods of Rock slot for free?

Yes absolutely! You can play the Gods of Rock slot demo for free, right here at VIPCoinCasino. Playing for free allows you to experience the bonus features, before choosing a stake you’re comfortable with, and checking out the payout frequency.

How do you win on Gods of Rock slot?

Matching three or more symbols across the 466 connecting payways will award a win. Mix that up with Charged Wilds, Reel Multipliers (up to 11x), Regular Wilds, Free Spins and a Bonus Game to create plenty more winning combinations.