Lake’s Five is a contemporary video slot from ELK Studios. It was released in 2018 and features a high-end theme and crisp visuals. The game is centered on a city gang trying to stop the evil plots of Mr. Romano, who is on an animal kidnapping spree. 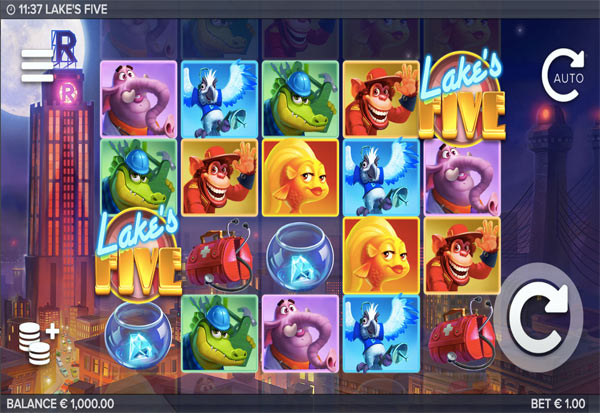 Lake’s Five is a contemporary video slot from ELK Studios. It was released in 2018 and features a high-end theme and crisp visuals. The game is centered on a city gang trying to stop the evil plots of Mr. Romano, who is on an animal kidnapping spree. Mr. Lake, with his crew of five, is poised to save the day in this animal-dominated universe, which has a 1970s mellow disco soundtrack. The crew will make a smooth entrance at the beginning of the game in a crisp animation showing each animal character.

This adventure takes place on a 5×4 grid, and the Lake’s Five RTP of 96.30% is backed by medium-high volatility. Even though the slot is staged in the nighttime, the experience is far from gloomy. With a little luck, you could win rewards of up to 2,160x. All that it takes is placing a bet between 0.20 and 100.00. You then spin the reels for a chance to land matching symbols on any of the game’s 178 paylines.

Animal symbols alone cannot do the trick though. You’ll need the help of the fleet of bonus features available. Look out for Wild respins, the Free Spins bonus, and a variety of different Wild symbols. Players do not have to sit behind a desktop to be able to enjoy this gaming adventure. Lake’s Five is an HTML 5 slot, so it supports mobile play.

how to play lake’s five

ELK Studios’ Lake’s Five produces wins when at least three matching symbols land on any payline. The symbol combinations are considered from the leftmost reel to the right, and only the highest win from a bet line is paid. The paytable dictates the monetary implications of these winning combinations. 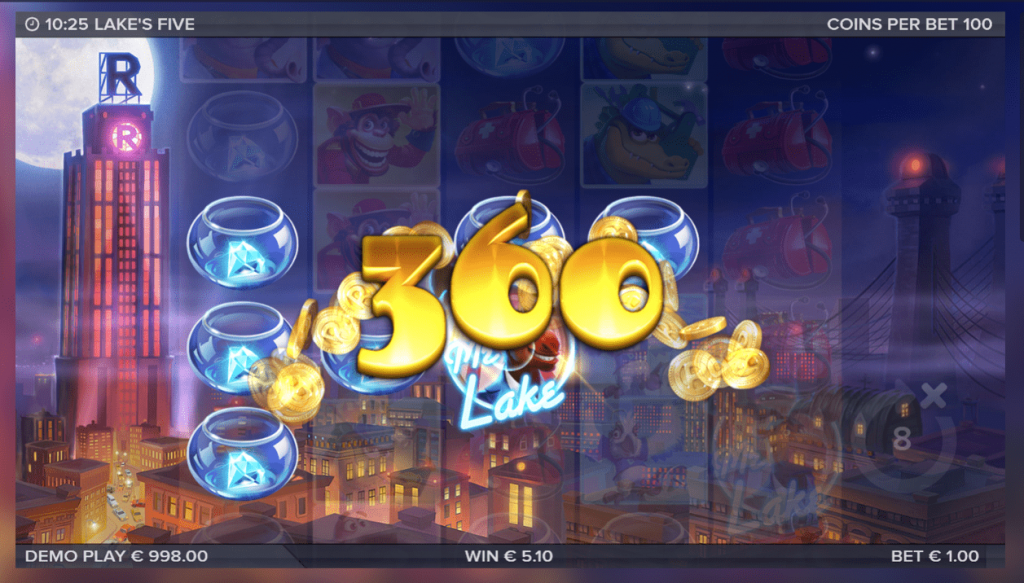 This feature comes to the fore when two Scatters land on the reels. Wild respins will see the Scatter symbols become Wilds. The relevant reels will nudge downward for every respin, while the others spin as usual. You can only trigger the Wild respins during normal mode. When one Wild falls off the reels, the feature ends. It will also come to a halt if a third Wild appears.

This is the most important feature that we will discuss in this Lake’s Five review. The appearance of three Scatters anywhere on the reels takes the game from normal to bonus mode, where you get 10 free spins. To unlock The Heist Bonus Game, the Scatters transform into keys, and every new key symbol that pops up during this feature triggers extra free spins.

Key symbols dish out even more goodies when three appear on the screen. They come as Walking, Sticky and Climbing Wilds.

Note that when Wilds cross paths and converge on the same position, they award a combined multiplier. Two and three Wilds generate 2x and 3x multipliers, respectively.

There are several highlights in this unique game from ELK Studios, and one of them is the prefacing animation that sees the gang swaggering to defend the city. The 3D visuals start the game like a movie and then proceed to the reels on top of the busy city. In addition to the impeccable theme and graphics, Lake’s Five comes with a unique gaming adventure that involves saving the animal-dominated city.
The Heist Bonus is the best reason to play the Lake’s Five slot. The round offers 10+ free spins and triggers several types of unique Wilds. This slot may seem like an animal parody of the movie Ocean’s Eleven, but there’s a good blend of a fun theme, a creative bonus game, and decent payouts to excite players.