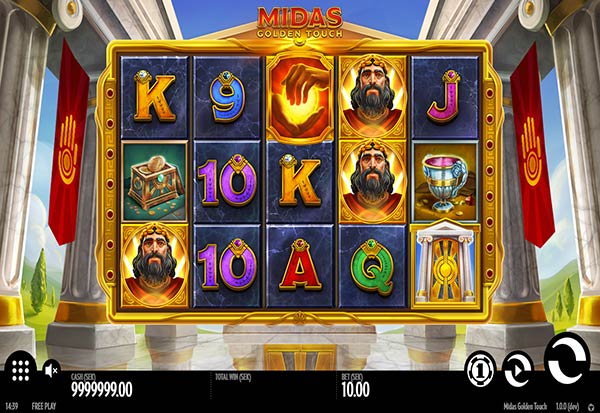 Step into a world of myth, wonder, and magic with Thunderkick’s Midas Golden Touch. Ancient Greek and Roman mythology paint Midas as the fickle and greedy king of Phrygia. The legends say that Midas one day found Silenus, companion to the god Dionysus, wandering around without cause. He treated this magical creature with kindness and in return Dionysus rewarded Midas with one wish. He wished that everything that he touched would turn to gold. Midas soon realized his mistake when his food and loved ones all turned into this precious metal. By bathing in the Pactolus river, Dionysus released Midas from the curse, and henceforth tales also tell that this is where the river gets its alluvial gold.

Thunderkick took the curse out of the Midas touch and tuned it to pure gold in the Midas Golden Touch slot. This slot drips with gold. The jewel-tipped normal icons are not that flashy, but the special icon graphics are intricate with a typical ancient feel. During regular spins, players can tip the scales with beautifully designed chalices, chests, and a delicate gleaming circlet. The special feature icons are intriguing. Hands cupping a golden sun deliver juicy multipliers, King Midas himself makes an appearance at times, and pillared golden doors hold promises of a bonus land. All this legendary magic is set against a spectacular marble pavilion with flags swaying in a gentle breeze.

Midas Golden Touch is a 5-reel, 3-row video slot with 15 fixed paylines. The techy sounds when icons drop, especially feature icons, slightly detract from the authentic feel of the game, but by no means spoil it. Golden trails highlight winning lines. Bets range from $1 to $100 per spin, and the game can be played on fixed and mobile devices. Players can expect a Return to Player (RTP) percentage of 96.1%.

Wins are triggered by hitting three or more identical icons from left to right. Top payouts are awarded by the golden touch and King Midas symbols. The King Midas symbol pays out up to 75x the wagered stake. Free spin rounds hold all the action, and a maximum multiplier can rake in a win of 10,100x the stake.

The 9s, 10s, and Jacks are the lowest-paying symbols, while the Kings, Queens, and Aces pay out slightly more when players hit four or five on a payline, going up to 7.5x the stake. The picture symbols have bigger payouts.

This slot review takes a closer look at the special features of this game.

How to play Midas Golden Touch

The wild symbol in Midas Golden Touch is a golden sun cupped and encircled by two hands. This symbol does more than a just substitute for other symbols – it is a multiplier that can deliver some spectacular wins. One wild symbol doubles your win. This might not sound overwhelming, but the more wilds a player lands, the more the win is multiplied. Two wilds multiply a win by four, while three wilds award a mind-blowing 8x the win. When players are lucky enough to strike four or five wilds, those wins are multiplied by 16x and 32x respectively. The multiplier wilds alone make this game a winner on any casino floor.

The picture symbols add a whole lot of action during normal gameplay. The highest-paying picture symbol is King Midas, and it has the same value as the wild payouts. Landing five King Midas symbols on a single payline pays out an astounding 75x the wagered bet.

Who doesn’t love a big-paying free spins round? Landing three or more scatter symbols – those elusive golden gates between vast pillars – takes you to the bonus round in Midas Golden Touch. These scatters do not have to appear in any specific order to trigger the free spins.

The allocated number of free spins depends on the number of scatters a player gets. Three scatters award 10 free spins, four 15 free spins, and five a colossal 20 free spins. The bonus feature flows automatically and requires no further player input.

Wins during the bonus round trigger a special sticky respins feature. This means that every time a player lands a winning combo, the winning symbols stay stuck for an additional spin. Players love this feature because it gives them a chance to land super winning combinations without sacrificing one of their free spins. What’s even better is that the sticky symbols stay put as long as winning combos pop up. So, if a player lands a three-symbol winning combo, those symbols remain in place for another spin. Should the player add another matching symbol on that winning payline, the symbols lock again. This respins feature can therefore deliver a true fortune during the bonus spins.

But there’s more! A random wild appears on the reels with each free spin. This increases the chances of hitting winning combos. When players land more than one wild symbol, they stand the chance to rake in some whopping wins. The reappearance of three or more scatters during a bonus also re-triggers the feature.

Thunderkick is an experienced game developer with a solid reputation and it does not disappoint with Midas Golden Touch. Players will hold their breath, anxiously waiting for that third scatter to drop, and bask in the glory of Midas’s golden touch with every big win.

Can I play Midas Golden Touch on my mobile phone?

Yes, it is possible to play this slot on mobile devices. Thunderkick ensures that its slots are optimized for play on any size of the screen.

Can I play Midas Golden Touch for free?

Yes, many accredited online casinos offer players the chance to take a new slot for a test drive before betting real money.