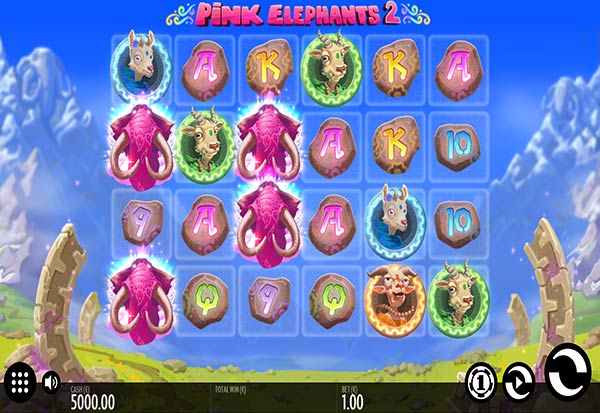 Open the portals to a world where old meets new and merges in a cascade of colors and sounds. Thunderkick’s sequel to its popular Pink Elephants slot does just that. As bringers of luck, strength, and wisdom, ancient cultures revered this majestic animal as a symbol of fortune and positive energy.

Thunderkick has given the Pink Elephants 2 slot a mystical feel, with the mountains in the backdrop and the reels suspended in front of azure skies. Eerie background music adds to this sense of mystery and anticipation. The spin and symbol drop sounds scar this effect to an extent, but by no means ruin the intrinsic qualities and fun of the game. Two bonus features, triggered by evasive mystery scatters, transport players to different realms where big wins are waiting in the wings. The 9s, 10s, Jacks, Queens, Kings, and Aces are etched onto ancient tablets that light up with a neon glow when a win is triggered.

Pink Elephants 2 is a 6-reel slot offering players 4,096 ways to win. Thunderkick developed this video slot for online casinos in the wake of the success of its Pink Elephants slot. Players can opt to wager anything from a dime to $100. The game is available on any fixed and mobile Android and iOS device. It delivers a Return to Player (RTP) rate of 96.13% and is a high volatility instalment with a max win of 10,000x the wagered stake.

How to Play Pink Elephants 2

Stakes ranging from 0.10 to 100 give players a wide choice of wagering options. As with other Thunderkick slots, this one has a casino chip that players can click to select their bets. It also comes with a nifty autoplay button, where players can set up to 5,000 auto spins. The auto spins stop once a bonus feature is triggered.

As mentioned, the low-paying icons appear in stones. Hitting blue, green, orange, or purple mountain goats pay significantly more than a nine or an ace. The pink elephant is the prize stake and can payout up to 10x a betting amount. This slot review also offers an in-depth look at the special features of Pink Elephants 2.

This game has only one wild symbol. It substitutes for all other symbols, including the sought-after pink elephant, except the scatter. This wild symbol can come in handy as it fills in the gaps to establish winning combinations.

Pink Elephants 2 offers two bonus features. This is part of the reason why this game is so popular. Players need to trigger at least three or more mystery scatters – these being the golden gongs – to enter a bonus game.

Players can land up to six scatters during the base game. Free spins are awarded as follows:

When players get two or more scatters during the bonus round, they will receive additional free spins. These extra free spins are awarded as follows:

Any bonus game begins with a free spins round of up to 19 free spins. However, that is just the beginning. Elephant orbs filling meters appear during the bonus round.

For every meter that is filled, the corresponding symbol turns into the next goat symbol. This significantly increases the chances of landing a big win during the bonus rounds.

Again, there is more. When players manage to fill all four meters, the corresponding symbols turn into those high-value pink elephants. Last but not least, every filled meter grants a player an additional free spin. So, players can increase their free spins as they go along and fill their screens with high-paying pink elephants for truly great wins.

The best online casinos offer players the chance to try out Thunderkick’s Pink Elephants 2. These demo versions include free play, which simulates the real-money play conditions so that players can get a true feel of what the game is about.

Thunderkick did not drop the ball with Pink Elephants 2. This sequel is even more enjoyable than its predecessor. It keeps players entertained and holding their breath in anticipation of that next big win. This video slot is a bonus feature in every virtual casino lobby.

Yes, you can try the demo for a free-play experience. Once you are ready, you can register an account with an accredited US-based online casino and play for and win real money on Pink Elephants 2.

Can I play Pink Elephants 2 on my mobile phone?

Yes, you can play Pink Elephants 2 on mobile. Thunderkick slots are optimized for play on any screen size.