Find out what buried treasure is hidden in BR Games’ Pyramids in this exciting new slot. 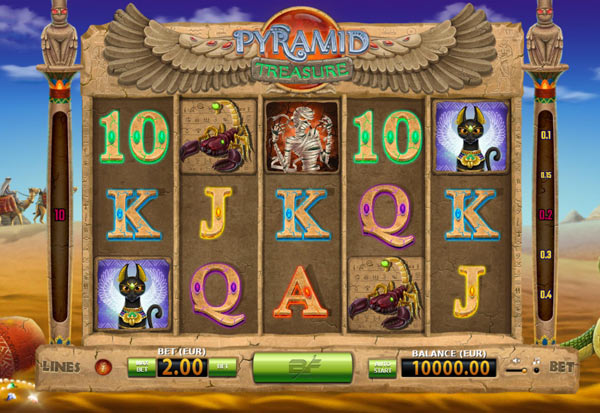 This is yet another exciting Egyptian-themed slot set in the middle of the Nile Delta, where players must hunt for precious treasures. Pyramid Treasure slot from BF Games presents players with five reels designed in the fashion of ancient Egyptian structures. This theme spills onto every aspect of the game, including the background that displays sphinxes, pyramids and Arabian travelers on camels.

When it comes to Egypt, you know the payouts and features are not meager, with several features and symbols to provide those pyramids of wins. The Pyramid Treasure slot was introduced to the casino world in 2017, and it has caught a lot of attention since then for its great graphics and simple gameplay. The mix of simplicity and sophistication is accompanied by an RTP of 96.02%, with medium volatility and 10 fixed paylines.

How to play Pyramid Treasure

Firstly, this video slot has simple gameplay as the objective is to land as many symbols on a payline as possible. Winning combinations that start from the leftmost reel to the last one can easily be improved with features available in this slot.

Special symbols such as the Cleopatra, Scorpion and Mummy icons are slightly different from the rest of the regular characters in this game. They provide wins even for just two matching combinations on a payline. Cleopatra is also responsible for the biggest reward in this game.

The pyramid icon is another special symbol that functions as both the Wild and Scatter. It substitutes for any symbol in this game and can also trigger free spins.

These are free rounds that can be activated by landing three Scatters anywhere on the reels. Players get up to 10 free spins, during which the pyramid symbol functions as an expanding Wild to increase the winning chances. Since this special symbol only requires two of its kind to make a win, whenever a symbol appears on the same screen as the expanding Wild, a win is formed.

This feature is a mini-game within this video slot. It gives players the chance to double their wins by guessing whether the card turned will be red or black. It’s a double or nothing card game where players lose their wins when their guess is wrong.

This button allows players to make consecutive automatic spins on a predetermined stake. Autoplay comes with advanced controls to keep track of wins and losses.

This is your ticket to those hidden treasures in the famous Egyptian pyramids. These prizes are no longer a myth as players are only a stake and a spin away. In this slot, bettors can wager between 0.10 – 200.00 and win prizes as huge as 25,000x their stake. All you need to do is spin the reels for at least two matching symbols to land on any of the game’s 10 paylines.

While the Egyptian theme for slots is one of the most common, this offering from BF Games is cut from a different cloth as gamers have extra ways to win with the Gamble feature and expanding Wilds. Symbols like the Mummy, Cleopatra and the Pyramid are significant highlights of this game and provide some of the biggest rewards. 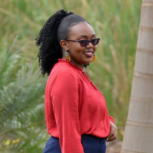 Mercy Mueni
Mercy is a freelancer with more than 7 years of writing experience. Most of her work revolves around analyzing and crafting content for the online gambling industry. When she’s not writing, Mercy spends her time hiking or reading about crypto.