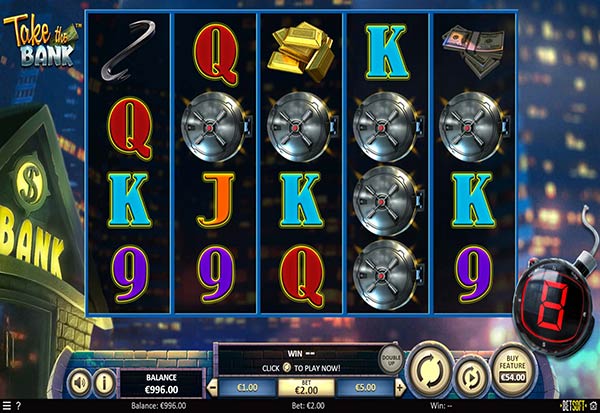 Take the Bank takes players on an exciting heist adventure on their quest to make the score of a lifetime! The path to glory is not cheap, however, and the journey is fraught with the need for expensive tools to continue just as much as it is about stacks of cash and diamonds. Do you have what it takes to pull off one of the most lucrative heists in history?

Betsoft released Take the Bank in 2019, and the stylish videoslot quickly became a mainstay for players interested in reasonable returns. Take the Bank’s RTP tops out at about 96.08% with a 20.12 hit frequency. These might not be the best numbers on the market, but they are slightly above average and make the slot a good bet if you are interested in fairer game odds.

As the name implies, the slot is centered around a bank heist. Players step into the shoes of masterful criminals as they sneak their way through bank security and open the vault. Fans of exciting spins without the type of wild changes other slots feature might be especially interested in Take the Bank, as it offers medium volatility. Add that to the game’s 225x win and 75 betlines, and it is easy to see why the game remains a popular pick.

Mobile users are also in luck with Take the Bank. The game is available on various mobile devices and features polished, bright graphics that look great on just about any device.

Perhaps the most notable aspects of Take the Bank are its bonus features, which we’ll take a closer look at below.

Bonus features are a critical part of almost any slot game, and Take the Bank has more than its fair share of exciting mechanics. Other slots might offer one or two features, but Take Bank offers around five of them! These include a buy feature, a free spins round, wild symbols, bomb countdown, and a risk/gamble bonus game.

The first feature to discuss is Take the Bank’s buy feature. This option allows players to trigger the free spins round as well as dictating with how many wilds they would like to play in exchange for a set stake amount. Triggering the round offers players 15 free spins, and players can pick from five to 10 wilds. Starting the round with five wilds costs 540, seven wilds cost 1,000, and 10 wilds cost 1,900.

Take the Bank offers a “gamble” bonus game. This mechanic allows players to gamble their winnings, and in an attempt to bolster them, the game can be triggered at the end of any standard win. Players can gamble all of their winnings or just half of them, and there is no limit to the number of times they can gamble. To play, players simply select “heads” or “tails” and watch as the coin on the screen spins. If you guess correctly, you receive double your stake!

Note that this feature is not available after a free spins round.

Take the Bank has a number of mechanics centered on the “wild” symbol. The first wild symbol mechanic features a robber, complete with a striped shirt, big beard, and black cloves, who has an explosive effect on the grid. Every time a robber lands, it turns into a wild bomb. These are essentially sticky wilds, and they remain in place until the bomb countdown reaches zero. When the countdown is over, the bombs detonate and offer the potential for bigger wins. Additionally, after every tenth spin, all of the wild bombs transform into wilds.

The second wild mechanic to keep in mind is that the icon substitutes all other symbols, with the exception of robbers and police cars. Landing five wilds on the board will also award the equivalent of a 5x diamond win!

The master bomb countdown offers Take the Bank players an interesting progression-based mechanic. The countdown begins at 10 and moves down every spin until it hits zero. Once it counts down to zero, the wild bombs, as mentioned above, turn into bombs and detonate.

Take the Bank is an entertaining slot with plenty to love. Not only is the RTP decent, but the game’s medium volatility makes it a good choice for a wide range of players, and its payout range from 0.20 to 20 is wide enough to please both casual gamers as well as those who prefer to live a bit more on the wild side. Perhaps the best part of the slot is our Take the Bank demo, which offers completely free play! Simply launch the game and start spinning.

We gave Take the Bank a high score because it has plenty of entertaining features to keep players interested.