Set in a 5×3 grid, this slot is backdropped by an expanse of desert sands. The gameplay takes you on a journey through forgotten cities and deep within treasure-filled tombs where you can win multipliers and free spins. 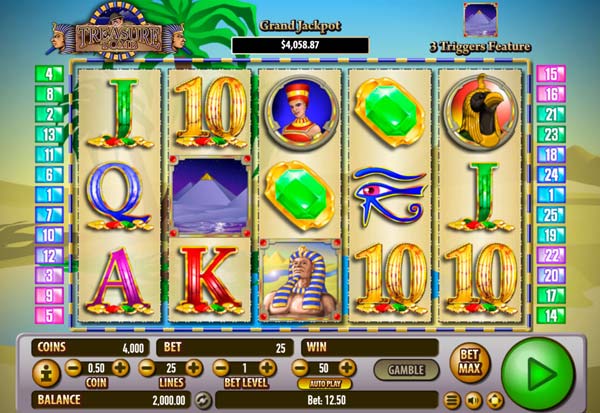 Treasure Tomb is Habanero’s Egyptian-themed slot with some of the scariest mummies you’ve ever seen. These undead characters pop up from their reel position whenever they land on the reels and form a winning combination. They also double up your win potential.

The ancient Egypt theme is a very common one, popularized by slots like Book of Dead. Treasure Tomb does an excellent job of tying together the theme across its highly detailed visuals and animation effects. Several of ancient Egypt’s most notable symbols are featured, including the Eye of Horus, the Nile, the Pharaoh and Nefertiti.

Set in a 5×3 grid, this slot is backdropped by an expanse of desert sands. The gameplay takes you on a journey through forgotten cities and deep within treasure-filled tombs where you can take advantage of Wilds, Scatters, win multipliers and free spins. Treasure Tomb is a low volatility slot with an average RTP of 96%. The game provides 25 paylines through which players can land wins.

How to Play Treasure Tomb

The mummy is the Wild symbol in this slot. It substitutes for all other characters except the Scatter. When it takes part in a win, it becomes animated and pops up on its reel position. The payout is doubled for all Wild wins. The Wild also offers instant credits for two or more on a payline and is the second-highest paying symbol in Treasure Tomb. 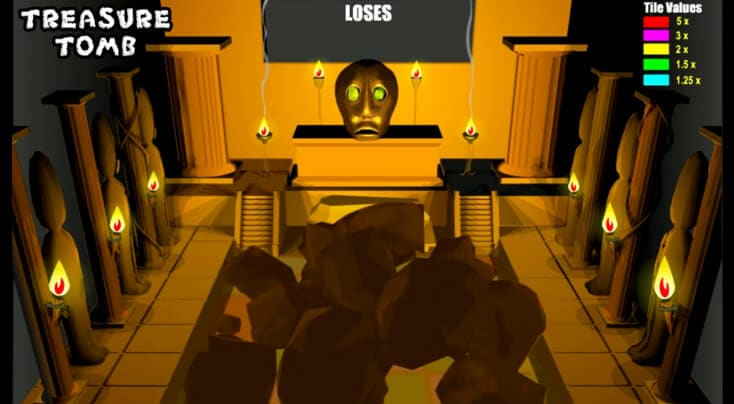 Represented by the framed pyramids, the Scatter is the trigger for the free spins bonus. It is also the highest-paying symbol, offering 400x the stake for five of a kind anywhere on the reels.

Three or more Scatters launch this feature automatically. An initial 15 free games are awarded, and landing more Scatters will retrigger it. The prize for the free games is the same bet for the spin that initiated the round. All wins at the end of the round are tripled.

Treasure Tomb isn’t Habanero’s most popular slot but has a lot to offer players. The gameplay is straightforward, and although it’s not the most feature-packed game, it delivers lots of excitement with the special symbols and free games. Best of all is the win multipliers that come with these features. Players get 2x wins for Wilds and 3x for free games. One of the highest betting ranges is available in this slot, making it perfect for true VIPs. While players can bet as little as 0.25 across the 25 paylines, high rollers can stake as high as 5,000.