Arctic Wonders has such a simple and cute design, but the gameplay can be quite exciting. This 5-reel Habanero slot takes players up north for a chance to win chilling cash prizes from the comfort of their mobile device or desktop. 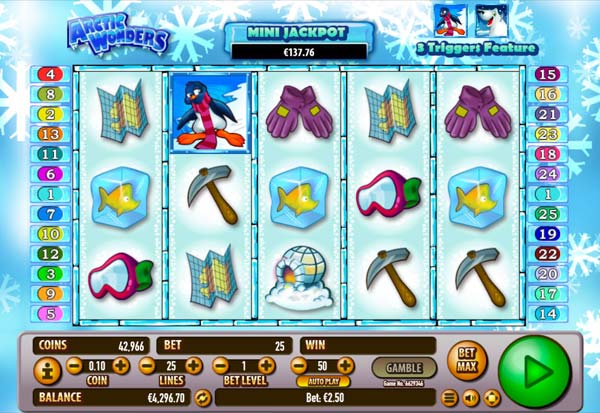 Arctic Wonders brings back the thrilling cold of the winter season to slot lovers. This 5-reel Habanero slot takes players up north for a chance to win chilling cash prizes from the comfort of their mobile device or desktop.

The Arctic Wonders video slot comes with 25 paylines and requires players to land as many matching symbols on them as possible. Beyond the winning combinations, the prizes in this Arctic-themed game depend on the bet size. The betting range here is from 0.25 to 5,000. Features such as free spins and the progressive jackpot deliver massive payouts, so players should keep an eye out for them. 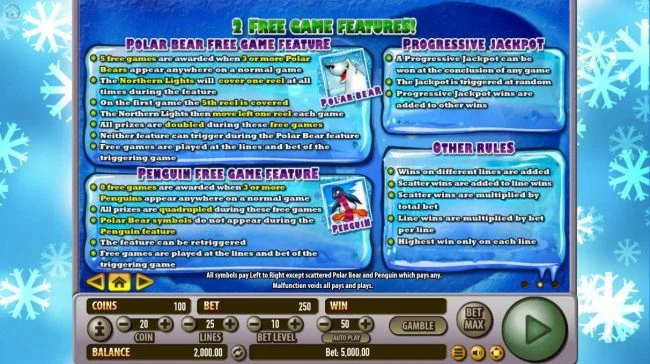 On Arctic Wonders, wins result from landing matching symbols on the reels. Fortunately, there are a lot of highly rewarding symbols, such as the igloo, seal, Inuit and Husky. Landing five Inuits at max bet provides a mouthwatering reward of 2,000,000 coins. Other symbols include the ice ax, frozen fish, masks and gloves.

In this Habanero slot, the wild is in the form of northern lights along with icy rocks. This symbol can substitute for all others, except the scatters. Also, wilds expand to cover their specific reels when they are part of winning combinations.

These symbols tend to increase the payouts when they appear.

The scatter, which comes in two forms, is one of the major highlights as they reward the free spins. Three or more of the polar bear scatter symbols trigger five free spins when they appear during the base game. During each of these free spins, the wild will cover one reel at a time, beginning with the fifth reel. The Wild nudges one reel to the left with each spin until it falls off the screen. This set of free spins doubles all wins, but the feature cannot be retriggered.

The second free games variant is awarded by the penguin scatter when at least three of them appear during the base game. Players get eight free spins, during which the prizes are quadrupled. Fortunately, these can be retriggered.

Scatter wins will be added to line wins and multiplied by the bet per line.

Arctic Wonders is one video slot that delivers a quality experience with a rare game theme and spectacular graphics, highly rewarding symbols and great features. This game offers two types of free spins that help to generate rewards to keep players warm. Global warming might be doing some damage in the polar region, but this slot will be patching things up with several prizes.

This slot has a wide betting range that runs from 0.25 to 5,000. This means that both casual players and high rollers can enjoy the game.

And why not! When there is a progressive jackpot that can hit the reels at any time.