Crazy Coin Flip is a unique live casino game from Evolution, one of the leading developers in the iGaming industry. 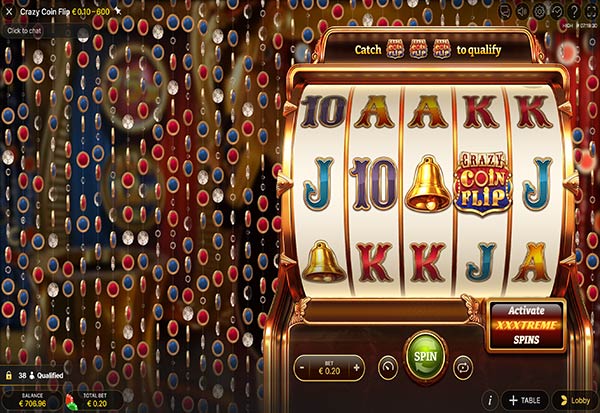 Building on their earlier successes in the live casino market, this latest offering from Evolution combines the live casino setting with RNG slot gameplay. This makes for an exciting and engaging gameplay experience that is truly like nothing else you have played before!

Players will accumulate multipliers across three different phases, where you play for a chance to take part in the nail-biting coin flip final. This final showdown makes for an intense, high stakes playing experience that will leave you hanging onto the edge of your seat!

Gameplay is divided into two coin flip rounds and a live bonus, each of which give you an opportunity to score multipliers that could build up to a sizable prize!

How to Play Crazy Coin Flip

But what actually is Crazy Coin Flip and how does it compare to Evolution Gaming’s other live casino offerings?

Crazy Coin Flip is a live dealer game that is put together and hosted by Evolution Gaming. Although it is essentially a live-casino version of a slot machine, the action unfolds in a unique way that makes it a very different game compared to some of the other slot games you might have played before.

The gameplay in Crazy Coin Flip unfolds in three distinct phases. Firstly, there is a qualification phase, which is a regular 5×3 slot with 10 paylines. In this phase, wins are awarded for matching three to five symbols on a line. To advance beyond this phase you will need to hit three scatters.

Once you have landed three scatters, you will then progress to the multiplier top-up phase. In this phase, you are given the opportunity to boost your multipliers and to score some extra bonuses!

Unlike the first phase which had a 5×3 slot, the second phase consists of a 3×3 slot with a single line in the middle called a ‘Top-Up’ slot. In the second phase, all the symbols are replaced by red and blue coins containing multiplier values. You are allowed to spin the reels as many times as you wish within the allocated time. However, you should keep in mind that this phase is time limited!

After you have run out of time, all the multiplier values will be added up and carried across to the final round. There are also options to stay in the multiplier and top-up round.

Once the second phase is over, you will proceed to the final round, which is where the big winnings are really made.

The final round is the coin flip bonus round and is your last chance to increase your winnings. This round is played with a live casino dealer who oversees a coin flipping machine — which is where the game gets its name from!

When you enter, the host will generate a x5 or x100 multiplier for the red and blue side. Once this has been allocated to one side, the host will pull a lever to flip the ceremonial coin displayed on screen.

Winners will be determined by whatever side the coin lands on, and you will receive the multiplier win on the winning coin side.

Following this second phase of the game, you will be able to take part in the grand finale. This is the live Coin Flip bonus round. In this round, you play for a shot at winning a multiplier of up to x2,000 your original stake.

As one of the leading iGaming developers around these days, with a string of hit titles now behind them, it was only a matter of time before Evolution Gaming started to invest more heavily into developing live casino games. If Crazy Coin Flip is any indication of what is to come in the future, we are very excited for what Evolution Gaming has planned!

Evolution has built nicely on the successes of their other recent live casino games successes, such as Crazy Time and Monopoly Live, and Crazy Coin Flip is a perfect display of what they do best. The user interface is polished, the production quality is extremely high, and the gameplay mechanics are simple enough for a beginner to play while still being engaging.

With that said, Crazy Coin Flip comes heartily recommended as the perfect live casino game to spend a few hours on a rainy day indulging in!