Dreaming of the wild plains of the Serengeti? Your khaki outfit damp with sweat underneath a safari sun? If so, then Great Rhino Megaways might just be the perfect slot game for you! 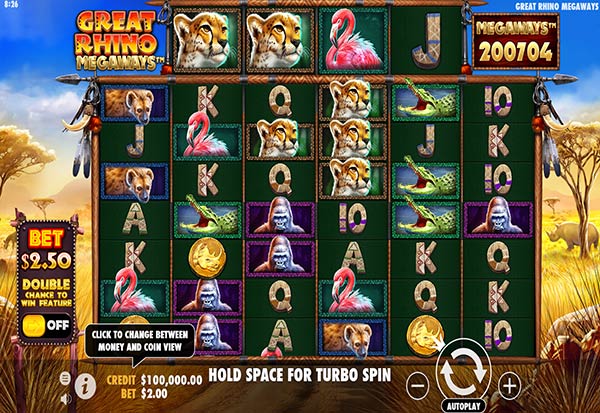 Great Rhino Megaways is one of the more interesting Megaways games on the market. Pragmatic Play has obviously put a lot of time and effort into creating this game, and you can tell right away that it has a lot to offer. There are some excellent features, and it also has some of the best visuals on the market. To find out what this game has available, continue reading our Great Rhino Megaways review.

The Great Rhino Megaways RTP is set at 95.59% as standard. However, it’s a variable RTP, so it can go as high as 96.58% and as low as 94.69%. This isn’t a particularly large range between the RTP values, so it’s not much of an issue when compared to other titles that offer this feature. The standard RTP means that when wagering 10,000 credits, on average 9,559 will be returned.

The volatility is high for Great Rhino Megaways. Part of the reason for this is that there are so many paylines included as well as a high maximum win. It does mean that there can sometimes be a while between wins.

All of the higher-level symbols in the game are linked to the theme. With animal symbols included, this really grabs the attention of players right away. Low-paying symbols don’t have the same link, but they are the standard playing card symbols that are expected in the industry. The bonus symbols stick to the theme, with the wild showing an action shot of the titular great rhino. Here are the symbols that you can expect to see in the game:

In terms of how the symbols are drawn, they are absolutely amazing. They have a realistic style to them, which makes sense as the game is rooted in reality in terms of its theme. This is definitely a game that is true to its theme throughout.

The wager range for Great Rhino Megaways is set between 0.20 and 100.00 credits. The stake isn’t split between the paylines due to the Megaways feature offering varying paylines on every spin. It means that all wins are calculated using the entire stake. There is also an extra bet feature that increases the bet size by 25% and doubles the chance of activating the bonus spins round. So, with this feature active, the maximum stake would increase to 125.00 credits.

How to Play Great Rhino Megaways

As soon as you start to learn how to play Great Rhino Megaways, you will realize that it’s not that difficult. The only complex aspect is selecting the increased bet size to double the chances of activating the free spins. However, even that isn’t too complicated to understand.

Once the stake has been set, the reels can be spun. Just like in any other video slot on the market, the paylines that are active will decide if a win is created. As this is a Megaways game, a large number of potential paylines are on offer – in this case, more than 200,000. Great Rhino Megaways has a cascading wins feature in place, which really perks up the base game.

This means that whenever a win is created in the base game, the winning symbols are removed from the reels. New symbols will then fall into place, which can create an additional win. This continues until no new wins are created.

Of course, the main feature that people are looking for is the free spins round. This begins when at least three of the golden rhino scatter symbols appear. This will then give the player a choice between four different spin options:

There’s no limit on how high the multiplier can go and the free spins can be re-triggered. This means that an extra five spins can be won if three or more scatters land again.

There’s a maximum payout of up to 20,000x the player stake in Great Rhino Megaways. This can be won during the free spins round. As the size of the multiplier increases, the maximum win becomes possible.

Great Rhino Megaways is a video slot that instantly grabs the attention of players. The graphics are fantastic with a realistic slant to them. On top of this, there are some amazing features included in the game. This really helps it to stand out, especially with the Megaways feature and maximum win of up to 20,000x the player stake.

Overall, this makes Great Rhino Megaways an excellent slot to try out. If you like high volatility games that can provide the chance for some big wins through great features, then this is the game for you.