Although it lacks the star power of other more famous games such as blackjack and poker, baccarat is by far the unsung hero of the online casino world. 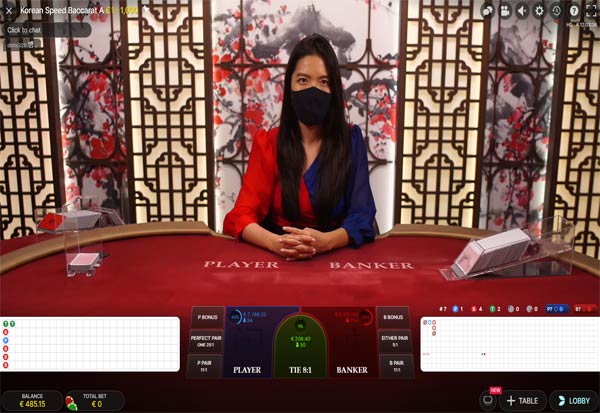 Featuring a rule set that is simple enough to pick up in the course of a few rounds, a pace of play that keeps things interesting, and plenty of room for strategizing at a high level if you so choose, baccarat really has it all!

Another great thing about baccarat is that it is perfectly adaptable to a range of different rulesets and variations. Thanks to the relatively simple ruleset and gameplay mechanics, baccarat is one of the most frequently adapted online casino games.

It is in this context that Evolution — who are one of the leading iGaming developers in the market — has released their update to this historic game for the modern era.

Although the precise origins of baccarat are highly contested, it is generally agreed that it emerged from Italy in the 1400s. Since then, it has undergone various evolutions, although the basic gameplay mechanics have remained largely the same.

Korean Speed Baccarat by Evolution updates this format for modern gaming tastes ramping up the speed at which the game is played. For those of you who can speak Korean and are looking for the next big challenge in the online casino world, Korean Speed Baccarat could be just what you have been searching for!

Before we give you our thoughts on what makes this version worth checking out, let’s set out what the basic gameplay mechanics are!

How to Play Korean Speed Baccarat

Much like its close cousin blackjack, baccarat is a relatively simple game that packs a big punch when it comes to fun.

A game of baccarat starts with two hands being dealt: one for the player, and one for the banker. The dealer will lay out two sets of two cards face down. It is then that players will place bets on which of the two sets of cards they think will have a total value closest to nine.

Tens and face cards are all worth zero points, while all other cards are worth their numerical value. If the total value of the two cards is more than 10, the second digit is the value of the hand. For example, if a set of cards consist of a nine and a six — for a total of 15 — the hand would be worth five.

If you bet on the banker hand and it wins, it is worth 95% of your wager.

There are also various other rules you must abide by, which include:

As you can see, the rules to baccarat are pretty simple. This simplicity, which facilitates quick rounds and easy play, has made it an incredibly popular game in the era of modern online casinos.

What Korean Speed Baccarat by Evolution does is provide a faster alternative for maximum betting opportunities and excitement.

A standard baccarat game round will typically last between 48 seconds to a full minute, which is pretty quick by anyone’s standards! However, Evolution’s speed baccarat version reduces this considerably.

In fact, in Korean Speed Baccarat, the average round time is reduced by half to an average of 27 seconds!

Although this is a relatively subtle shift, the effect on the game is significant. By creating a time pressure like this, players are forced to react quickly and in real-time, making decision making and strategy that little bit more exciting.

Korean Speed Baccarat also adds in Korean language support, which is great for native Korean speakers or those looking to improve their language skills by playing Korean casino games.

If you have found that the more traditional versions of baccarat are a little slow paced for your tastes, then Korean Speed Baccarat by Evolution could be just what you need!

Evolution has done an excellent job of updating this classic game for the modern, fast-paced tastes of today’s gamers. While the differences in format might appear to be minimal, the effect on the game is anything but.

By tweaking the time between rounds, Evolution has added a unique dynamic to the game. Speed is of the essence and the added pressure of having to keep up with the dealer gives in-game decision making an exciting edge.

Although this version of the game definitely won’t be to everyone’s tastes, if you are looking to add a bit of excitement to your life, this could be the perfect version for you.

Novice or less advanced players might be better served earning their stripes and building up some experience on the classic version. However, if you are a frequent baccarat player and have a solid grasp of the rules, this speedy version is definitely worth checking out. If you happen to speak Korean, either as a native speaker or a language learning fan looking to improve their skills, Korean Speed Baccarat could be a match made in heaven!

Give the demo a try today and see if this Korean casino game has what you are looking for!